The first time I shaved my head was the last time I was sexually molested. It was a little over 4 years ago. I have a long sexual abuse history, but thought I had “done all the things” to possibly avoid anything similar in future. You know… all the things the victim blaming society we have been living in says women “should do” in order to avoid sexual advances… (which is a subject that chaps my ass but I will save that for another day…) 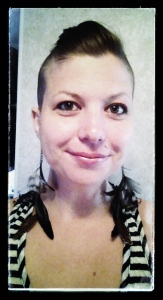 and still it happened. I think it was a mixture of feeling dirty and feeling if all the weight I had gained didn’t do the trick to keep me safe, perhaps having no hair would work. (Incidentally it did not prevent strange men randomly coming up to me to discuss my panties or to ask me for sex, just for those who are wondering, because the issue doesn’t have anything to do with what women do or don’t do OBVIOUSLY.) So I had a mohawk for a hot minute followed a few days later by a full on shave. This shaving was out of fear and shame. But that situation and that head shaving lead me to the greatest freedom of my life and helped open my Eye to so many things I still hadn’t fully understood. I am grateful for all experiences, even the hard ones, because my life keeps becoming more and more beautiful and free. But this first head shaving was one born of fear.

An acquaintance of mine lost her infant son to ATRT cancer. I could never imagine something like this happening. I think it must be one of the greatest sufferings possible in

a human life. My heart broke for her. I didn’t know even what words to say. But when she posted on Facebook that she was going to shave her head to raise money for ATRT, I realized I could offer that kind of support. I volunteered to shave my head with her to see if it would sweeten the money raising pot, and 2 or 3 other of her friends did it as well. I believe in all she raised $7,000 towards ATRT cancer research. This head shaving was born out of compassion, solidarity, and love for “others”. (Side note: I generally put “other” in quotations because I am a believer in Oneness and that “other” is really just a third dimensional illusion.)

fruits such hardships can yield over time. I’ve always loved dyeing my hair. All colors. So when I had a vision of myself with bleached hair about a year ago, I didn’t hesitate to jump on the bleaching train.
This vision came at an auspicious time. About 2 weeks before, I had seen my Self, my real Light Being Self, as I looked into my mirror thinking “I want to see the Truth of my Self.” Later that night, I was directed by Spirit to lay in my bed. I had set up a crystal grid many days before with no specific purpose, it had just felt right. I laid in the bed and rather quickly I astral projected into the entryway of what I was told was the Hall of Records and spoke with some Light Beings. (Interestingly I watched an Infinite Waters YouTube video the next day called “10 Secrets the Illuminated Ones Won’t Tell You”, and it was pretty much all the things they DID tell me and I just LOVED that synchronicity and affirmation.)
On the particular day of the hair vision, 2 weeks later, I had finished yoga and meditation on the floor of a motel room in a small town I was visiting, and I sat in front of a very large mirror staring a moment. I saw an image of me glowing once again, but this time as my physical self, with gold jewelry and almost white hair. I had this idea that I needed to make my outsides reflect the Truth of my Be-ing. And this is where the blond came in.
Now, living in an RV and dry camping in the forest makes it a bit difficult to make brown hair blond, so I spent a lot of time with dark roots or going to truck stop showers during slow times so I could take awhile. Nevertheless, I was REALLY attached & dedicated to this blond hair thing. (Still am… not gonna lie… it’s taking a bit to let it go!)
Why is this background important? Firstly, because I had become attached to an IDEA or an IMAGE (and I’m pretty attached to the idea of non-attachment 😂 ), but secondly and most importantly, I was so attached to it that I wasn’t heeding the small voice in my head that said to allow my hair to now return to its natural state, which started slowly about half a year ago.
I went to the doctor’s office and had lots of things tested. My results for the most part were friggin fabulous. I mean FABULOUS. However, there was one issue. My thyroid has been off a long time, and even when my T4 looks “normal”, I still show all the signs of hypothyroid issues. Well, I finally have found the best physician in the world who was eager to check my other thyroid levels as well as a couple of other things. In the most layman’s terms I can explain it in, what we found was that an ARMY antibodies are attacking my thyroid, either because there is a chemical in there that IS harmful, or because they THINK a chemical that is harmful is hanging out in there. My doctor wanted me to begin my detox I was planning for next week right away, and continue with my raw food diet. In 6 months we are going to recheck the levels.
AND I COULDN’T STOP THINKING ABOUT THE CHEMICALS IN MY HAIR.
I have a TON of ideas of what is going on mentally that would express itself in my physical body like this that I will save that for another blog, BUT the physical expression

could still, in my opinion, come from things like my skin (the largest organ of my body) ingesting weird hair dyes and bleach. I said to Spirit, “I need a strong sign of what to do.” I thought about it more: What was the most loving thing I could do for my Self? The answer came up straight away. “Shave it.”
“Okay,” I thought, “I’ll shave it when I get home. It is decided.”
I looked up and saw two license plates. One said “3333” and one said “333” and a sign said “0303” and I knew it was all good. Those were my signs.

I got to my mom’s house and shaved my head upon walking in the door. This time, I did it because I LOVE ME.

I have come a long, long way in 4 very short years. I am grateful.

Yours in Oneness ❤ Freedom

Welcome to the view through my Freedom perspectacles! It has been my life’s work to learn a variety of healing techniques, many in the realm of spirituality and spiritual growth. I specialize in customizing the right tools for each growth opportunity in our lives. There are as many different ways of healing as there are people, and we each have our own path to follow. But I believe they all end in the same place- that all paths lead OM.